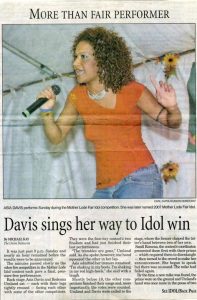 It was just past 9 p.m. Sunday and nearly an hour remained before the results were to be announced.

The minutes passed slowly as the other five competitors in the Mother Lode Idol contest each gave a final, pressure-free performance.

Back stage, Asia Davis and Redeana Umland sat each with their legs tightly crossed facing each other with some of the other competitors. They were the four-day contest’s two finalists and had just finished their last performances.

“The trembles are gone,” Umland said. As she spoke, however, one hand squeezed the other in her lap.

Shortly before 10, the other competitors finished their songs and, more importantly, the votes were counted. Umland and Davis were called to the stage, where the former clasped the latter’s hand between two of her own.

Sandi Romena, the contest’s coordinator, presented them first with their prizes which required them to disentangle then turned to the crowd to make her announcement. She began to speak but there was no sound. The mike had failed again.

By the time a new mike was found, the prizes were on the ground and Umland’s hand was once more in the press of two of Asia’s. The eyes of each were fixed on Romena. She begins her announcement again and is successful.

It was a fitting end to four days of intense local competition among 10 initial contestants for the Idol title local, amateur singers with big-league ambitions.

The pack was narrowed Friday to seven, and to four on Saturday, with two finalists on Sunday.

The final day for Umland and Davis formally started about 7 p.m., 30 feet behind the performance stage in a small room with two tall padded tables, a few mirrors and single couch.

An hour before the competition started, seven of 2007’s contestants gathered in the room for rehearsal before the final night. Three of them knew they have been eliminated. Two more were told once the show started.

A Columbia College student studying business, she practiced from 7 a.m. to 4 p.m. every day.

“It’s success no matter what,” she said, adding love of performing, inspiration (Mariah Carey), moving to California from New York her senior year and the future drive her. “I’m either going to be a singer or a business manager. Failure is not an option.”

Just past 7 p.m., all seven performers have now arrived. Romena was in the center of the room to talk about details. The contestants peppered her with questions, their jitters seeming to add to the general confusion.

Umland, however, is silent. She is sitting on one of the padded tables, her knees pulled to her chest and back against the wall.

The 19-year-old is a lifelong Tuolumne County resident, but she’s only gone to the Idol once before, and not as a participant.

“There aren’t many chances to perform once you’re out of high school,” said the 2006 Sonora High graduate, who will start at California State University, Long Beach, this fall.

When Romena’s explanations concluded, the contestants were ushered out to practice the stage setup the seven sang “America the Beautiful” to start the show.

A teacher’s aide at Jamestown Elementary, the Sugar Pine resident is perhaps the only one who did not show a shred of nerves. Her secret?

“I had an awesome day at church,” she said.

Married five years ago, she has been singing since she can remember. Her parents encouraged it, but not when it took the place of sleep.

Ten minutes before the show started, the group scattered. Davis began voice exercises. Umland walked off, talking on her cellphone.

At 8:05, Romena, the MC, took the stage. After a few introductions, the girls begin to enter, singing as they come. “America the Beautiful” goes off with only a few slips.

As the applause died down, the audience braced for eliminations. But Romena first brought mentor and coach Julie Ludlum on stage for a thank you, introduced the judges and went through their reviews of the four. Then she asked Joy and Jenna to step forward.

They have been fantastic, she said. She hopes they will return next year.

Davis fell backwards in a half faint, half celebration. Umland smiled, saying she’s “ecstatic” to be a finalist.

More events hold time as the two get ready, but within 20 minutes Umland takes the stage again. She clenches her hands at her sides, then knots them in front of her.

Then, as the song begins, she opened up to the audience. As her voice rose, her hands found their way from her sides.

There was applause, the critics raved and then it was on to Davis.

As the song started, she took off. She ran the stage, belting out the lines, bouncing and bopping.

Again, applause roared and critics again weighed in. The applause was neither louder nor softer, the praise neither more nor less effusive. They were neck and neck.

For the second and final round, each got to choose their song. Umland chose the beautiful and haunting “Wade in the Water,” while Davis opted for “Trouble.”

It was their last chance to change minds.

Umland was first. She mouthed the first lines, but no sound comes out. The mike is not working.

On the third try, it works and Umland seems all the better for all the hiccups. Her hips rock and her voice thrills low and then high.

Even the lyrics have an unintentional hint of defiance: “Who’s that yonder dressed in red?” she asked, with her red-bloused competitor behind stage.

Prancing on stage, Davis shone a smile and let out a big giggle, and then the music came on.

If she bounced before, she strutted now. She thundered through the song.

Again, the audience exploded into applause. After they died down, Judge Bridgette Fanucci summed up the experience.

“When you take the stage, there is nothing else going on but you.”